This brief scene is from Camera Obscura. It's not easy to extract an excerpt that makes sense in its own bubble, from a novel that shifts from location to location quite a lot. The painting by Monet, which decorates my blog, above, shows how the protagonist Bart Zacharin thought of Le Havre. He found it quite different when he got there.


This is from Chapter Eight. 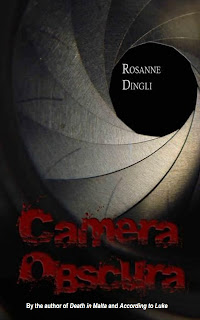 Comments are always welcome. Click on the book cover - you will be taken to where you can read a sample from the beginning of the novel.
Posted by Rosanne Dingli at 7:03 PM 2 comments

How important are rankings?

Whether you are an author, a reader, or both, it pays to examine how much importance book rankings are given by purchasers.

Examine your own buying habits first. What sends you to particular books? Which online retailers do you frequent? And most importantly, what do you look at first when you reach the book or author you seek?

Answer those questions honestly (go on, no one can read your mind) and think again.

Most people seek books because they have heard them mentioned by someone, or they have seen them mentioned in a blog. When they arrive at the book's page, they look at the cover. Then what? The number of pages? The blurb? The publisher? Reviews? Does anyone at all look at a book's ranking?

What a ranking means often confuses book purchasers. Is it a popularity gauge or a statistical average? Rankings are comparative, of course. They can change whether or not a book sells, simply because others do, and the balance shifts. They must be better the smaller they are, because #1 is best. Aha. So what does 214,361 mean - and is it unique, or do many books occupy that 'place'? There must be a bottom number, people suppose. If there is, it must be rather big. Has anyone ever seen the bottom number?

What position a book holds in the grand order of things is probably not what's persuasive to purchasers looking for a good read. Perhaps those figures present more significance to authors and publishers than they do to readers.

If you land on the page of a book recommended by a friend, chances are unlikely you will be dissuaded by the ranking, if you even bother to look.

-- Amazon Best Sellers Rank: #46,393 Paid in Kindle Store --
How important is this line in any book's description? This one, by the way, is today's from The Da Vinci Code by Dan Brown.

Readers - tell me about the importance of rankings when you shop for books.
Authors - tell me whether you regularly check your titles' rankings to see how they are faring.

I suspect it's this bit out of Death in Malta that has led a number of my fans to gift the novel - in eBook or paperback - to reader friends who love a bit of romantic stuff in their mysteries. 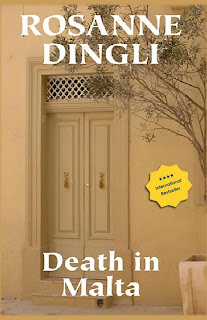 Hours later, Gregory could not remember how they got to the big iron bed in the front room. Pushed as it was underneath the window, it exposed them to the full brunt of the fireworks’ noise, but by that stage he was totally oblivious to the bangs. Or was he? Forever after, Gregory thought, as he stood at the door in the corridor, the festive explosion of fireworks would arouse in him the quick erotic sensation he felt that evening.
They had tumbled fully clothed onto the made bed, kissing deeply. By the same lapse of time and memory, how they got out of their clothes and under the sheets was lost now. He might remember one day, after this first rush of excitement cooled. He remembered only the sensation of her warm tense body against his and the way her hands fluttered over his skin. She was at once compliant and explorative, bringing new feelings to his body. It was not surprising, as it was some time since he had been with a woman. What was revelatory to him that night, even before their lovemaking ended and Patricia drifted off to sleep, was the awareness of involvement, the tender certainty of relating to her in more than just a superficial or physical way.
In spite of efforts to chase the thought away, Gregory remained entranced. ‘Come on, man – this is not the first and only casual encounter you’ve had.’ He mumbled to himself as he dusted a hand past his face, as if to dispel any entrapping tendrils she may have woven around him. But he knew it was not a casual feeling.
He watched her sleeping form from where he stood at the door and felt again the passion, the wild desire he experienced and satisfied so completely. He felt again her breasts, the soft skin stretched over her hip bones under his hands, the straight series of knobs her spine made down her back. He re-experienced the flush of excitement as he recalled the quick movement of her body against his, the urgency she neither imitated nor faked. And her soft hoarse voice.
He longed to wake her, to lie again beside her and hold her as before in his arms, but he slid softly under the sheets on the side of the bed furthest from the window and lay on his back, staring at the ceiling, which was becoming gradually lighter. He realised he had not noticed when the fireworks stopped.

If you are a reader, tell me whether the latest trend toward explicit intimacy in fiction is to your liking or not.
Posted by Rosanne Dingli at 11:59 AM 5 comments

"Wherever good books are sold..."

When people discover you are an author, they immediately ask where your books are to be found. In the virtual world, all readers expect books to be on Amazon. After all, they are rather big - to make a small understatement.

In the physical world, they ask questions such as, "Can I get your latest novel at Dymocks?" That's if you live in Australia. Dymocks is one chain that survived the recent bricks-and-mortar bookstore mass extinction. "Can I order at my local shop?"

It is the duty of every author to make sure their books are available - even if readers must order - in as many places as possible. Online, this poses few real obstacles. In the physical retail world, it's somewhat harder. Many things, however, are possible.

Online, an author can be assured a presence on most retail book-vending websites. Limiting oneself to Amazon is not the wisest strategy. Although it is acknowledged as the traffic cop of books, where anything and everything is to be found, there are dozens of other places where books can be ordered. Depending on where in the world you are, a favourite retailer can be found who might mail you books free of postage charges, or might offer loyalty schemes that really pay. Earning points towards more books is never a bad idea. Others might specialize in your genre, or hold regular specials and sales that make a great deal of financial sense.

If eBooks are the thing, it pays readers to create an account at a number of retail outlets online, because sales are rather rapid affairs that come on and disappear quickly. It's generally free to open accounts, so it does not hurt to have purchasing facilities in as many places as you can. Try Kobo, Nook (run by Barnes and Noble), iBookstore (run by Apple), Diesel, Smashwords and the eBookStore at Sony - just for starters.

Where paperbacks or hardcovers are concerned, buying online is often the most economical way. Even though there's a wait involved, there's nothing nicer than receiving your latest choice in a nice brown package, right on your doorstep.

There are those who still love to browse in bookshops, however, and catering to that crowd is essential if you are an author who understands diversity and how it works. More and more nowadays, this means forming a relationship with your local bookstores. Shop owners are people too, and love to understand their public. Access to local authors means their sales can become meaningful, and that they can host signings and launches, where patrons usually buy much more than just the book of the day.

Thinking outside conventional possibilities also works for authors and readers. Do not confine your marketing or purchasing to bookstores. Books can be found anywhere - florists sometimes stock romantic novels and poetry books around Valentine's Day. In the Christmas holidays, newsagents and giftshops offer relevant books to their customers, and many a gift basket or hamper comes with a good choice of paperback. Look on the counters of smart delis and purveyors of fine foods and you are sure to find a cookbook or two.

Readers and authors do well when they consider that age-old cliche, "Wherever good books are sold."


It's the same wherever you look. Diversification seems to be the saviour of retailers, manufacturers, publishers, and authors. In nature, whole species benefit from a tiny change in diet or colouration.

That's what I want right now - a bit of a difference to liven up my readership. This was the primary reason behind publication of my novella The Latin Cushion. Inventing a whole new character for a new series of detective mysteries based in Perth was a challenge, but I did it - and interest from my readers means I must continue!

Diversifying focus seems to refresh an author - and diversification of outlets also puts a fresh face on one's following. A brand new kind of reader seems to be discovering my fiction - and we all know that discoverability is the new buzz word in publishing.

Placing books in different places is also something that works. I find that Kobo is improving its search algorithms, extending its reach with Kobo Readers, and gaining ground in the UK... all good news for an author like me.

If you are a reader, tell me what changes you intend to make in 2013.

If you are a writer: which changes have you found most useful?