An Interview with Morgen Bailey!

At last - the shoe is on the other foot. Morgen Bailey, doyenne of online interviews, has accepted my invitation. This interviewer par excellence has allowed me into her virtual 'office' and has answered my specially-tailored questions. This is a rare event, so do take your time. Make a cup of tea, because it's long, and very enjoyable.


Hiya Morgen, and welcome! You are known as the intrepid interviewer who gets hold of some interesting writers and grills one every so often… very often! How does it feel right now to be on the other side of the microphone?


“Intrepid interviewer” really? Wow. :) I’m very lucky actually because the interviewees tend to come to me rather than the other way round and yes, I’ve had some authors whose books I already happen to have, or see out and about after they’ve approached me which has been thrilling, and humbling, in both cases.
I won’t waffle on (because I know I’m good at it) but it all started because I was asked a couple of times (WhoHub and Teresa Morrow) to complete a questionnaire and really enjoyed it (so I guess that answers the last bit of your question) and my blog was a couple of months old (I started it at the end of March 2011 because I’d heard it a good thing to do) so I thought I could do this myself and the rest, as they say, is histoire. Well, they’d say that in France.
Now that I have interviewed so many authors (over 100 to-date) I’m getting a bit braver with asking other authors. Some ‘household’ names have said “yes” but they’re very busy so inside I’m jumping up and down but am realistic enough to know that it may either be a while or may not happen but I’m really enjoying it although it’s hard work (I post an interview each morning then an author spotlight or guest blog in the evenings) but I’ve never been shy of that, which is just as well isn’t it because I want to be a writer full-time.
I’ve just secured Katie Fforde (who I knew was a friend of one of my writing friends Sue Moorcroft) as the competition judge for the 2011 H.E. Bates Short Story Competition (http://www.hebatescompetition.org.uk) which is run by one of the writing groups I’m involved in (would it be too shameless to mention them? I’ll risk it http://www.northamptonwriters.org.uk) so maybe I’m braver than I thought but I’ve not worked up to asking her to take part in my blog… yet. :)
Your name is easy to spell for me, since it means ‘tomorrow’ or ‘morning’ in Flemish, so I think it’s very pretty. I also have a name that is easily misspelled. It has to do with being an unusual person – how have you dealt with being singular and noticeable in your life?
Ah thank you. That’s very sweet of you to say but I’ve actually cheated as (for anyone who read my interview no.100) it’s a pseudonym. My real name’s very ordinary (Alison) and I love being someone else, although at times I do feel a bit of a fraud, not sure why really. 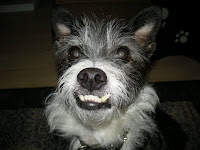 My dog (whose picture is splattered around the internet almost as often as mine) is Bailey and my previous dog was Morgen. I have German connections going back many (over 30) years so that’s why I went with the unusual spelling. Sometimes I wonder whether it was the right thing to do (as it’s so often spelled the normal way; Morgan) but I think once it sticks, Morgen is more memorable and I like it being a bit different. Besides, the domains for Morgan Bailey were already taken (I actually checked after I’d set up my website) by a coffee company, construction company and porn star – that makes for an interesting conversation!
You prefer to have your avatar precede you wherever you go – who made the portrait, and how much like it are you really? I’m talking about personality rather than looks – what do you think it says about you?
I’ve just changed my Twitter picture to the photo that inspired the caricature because author Marika Cobbold (who I met when I was volunteering at Chorleywood Lit Fest November 2010 – she’s great!) was having trouble changing her picture so I changed mine and relayed the steps and when she saw the new one she said she loved and that I should keep so I have. 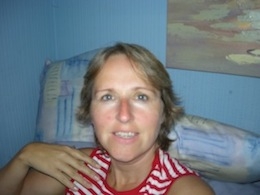 Posted by Rosanne Dingli at 9:50 PM