Image via WikipediaIn a few days, the financial year comes to an end for many around the globe. This announces the necessity of filling in a tax return and the great paperchase that fills the middle of each Winter in this house. Some words become taboo. "Don't say receipts! Mum will have a fit."

I do realize this is not the only household in which the end of the year becomes a rather frantic time of totting up, rounding off, calculating, reconciling, and searching for that vital but missing piece of the fiscal puzzle. It is a rather lonely pursuit, though - it's not possible to phone a friend, or put your unreconciled balance on FB and ask for support and help.

To celebrate and console, then, I am holding a sale. No - I am not selling Grandma's candlesticks in an effort to adjust the balance. I am holding an ebook sale to cheer everyone up who has a break in the grand receipt search, to have a nice fortifying cup or glass of something, and a relaxing read.

All my collections of short stories in ebook form have been reduced to a ridiculous but very affordable $1.99 ... Yes - you too can download one or two and either put them away for later or enjoy them on the spot. Your Kindle will thank you for it.

And remember - you do not need a Kindle appliance to take advantage of this crazy offer. You can download Kindle for PC and read it all on your computer. Or Kindle for your phone. Or your Mac.

I am enjoying this little caper, and can't wait to hear your comments. Remember - don't mention receipts.

And many happy tax returns to you! 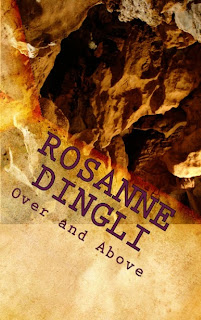 This short story of mine is taken from my newest collection, Over and Above. If you enjoy it, tell me why.
Piracy

‘Shut up, Clare. Look for the river chart, will you?’
‘How about Sandra or Petra or ... hey! Marina! Perfect. Marina it will be.’ Clare clapped her hands and riffled about in the conglomeration of odds and ends in a locker. She surfaced with a cardboard tube. ‘This?’
‘That!’
She smiled at him.
Edward grimaced. He was actually pleased she came.
In half an hour, they were on open waters, looking at green strands of land on the horizon, trying to fix landmarks, which looked so different from when they drove about in the car, from when they were landlocked, concrete objects.
‘So glad you feel better about this now,’ Edward said suddenly. His back was turned to her, a hand raking wind-swept hair out of his eyes. He always looked away in times of emotion or stress. Or discovery or loss or happiness.
‘Mm.’ Claire did not want to destroy his mood.
‘Well - you do, don’t you?’
‘Umm. Don’t know.’ She didn’t like to admit anything to him just then. She was still thinking of last night and the new striped curtains she had put up in the bedroom. They were orangey and warm, vibrant and a strong statement in the room. But a violent clash with the carpet.
‘Oh, Edward,’ she sighed. ‘They are far too orange.’
‘We’ll get used to them,’ he had said to console her.
She sat on the bed and wondered about her recent misses. The big hole in the hall wall where she tried to hang the boat picture.  The unrisen bread. And now, the clashing curtains. All small, all unimportant: but gathering into a hilarious muddle, which was so unlike her.
Edward was determined to get her to make a positive statement about the boat. ‘You like this now – you even want a name for her.’
Clare said nothing.
‘Marina,’ said Edward, to prove he had been listening. ‘Marina, you said. I like Marina.’
‘Or Roger...’
‘Jolly Roger.’
‘... because it could be a boy.’ She beamed and raised her eyebrows.
And at last he understood.
Over and Above is available for Kindle and in paperback. Find it at your favourite online book retailer.
Posted by Rosanne Dingli at 11:51 PM 0 comments